In Manila on August 6, 2017, the foreign ministers of the Association of Southeast Asian Nations (ASEAN) and China endorsed a framework for a code of conduct in the South China Sea (CoC). The framework had earlier been approved by senior officials from ASEAN and China at a meeting in Guiyang, China, on May 19.

Statements by the two sides were broadly welcoming of the framework. In their joint communiqué—which was delayed for nearly 24 hours due to differences between some member states on how the South China Sea dispute should be characterized—the ASEAN foreign ministers said they were “encouraged” by the adoption of the framework, which would “facilitate the work for the conclusion of an effective CoC on a mutually-agreed timeline.” ASEAN secretary general Le Luong Minh said he hoped the framework would “pave the way towards meaningful and substantive negotiations towards the conclusion of a CoC” but added a note of caution: if the code was to be effective at preventing and managing incidents in the South China Sea, it would have to be legally binding—a phrase that does not appear in the framework.

According to China’s foreign minister Wang Yi, the framework “brings stability to the issue, demonstrating a positive momentum. This shows our common wish to protect the peace and stability in the South China Sea.” But Wang went on to warn that substantive negotiations on the contents of the code could only begin if there was “no major disruption from outside parties,” a veiled reference to the United States, which China has consistently accused of “meddling” in the dispute. 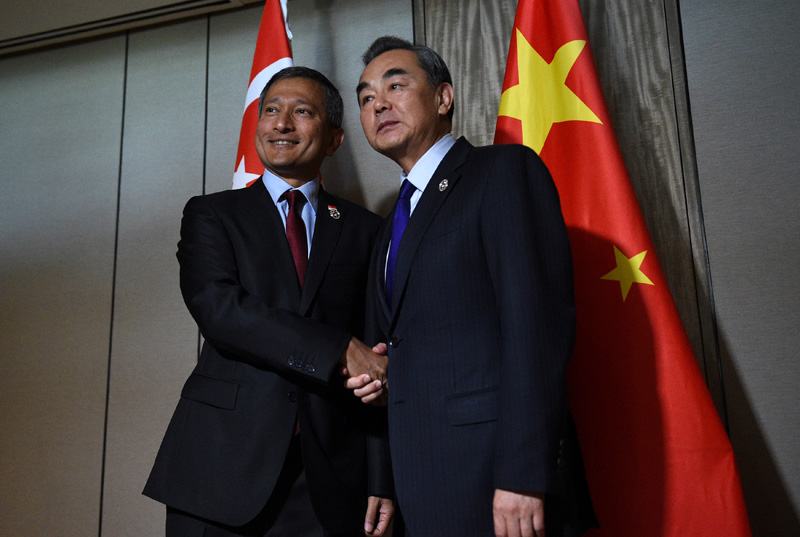 From a glass-half-full (or slightly less) perspective, the framework represents progress; from a glass-half-empty perspective, it is a disappointing outcome after more than three years of discussions. The framework—as the name suggests, to be fair—is short on details, reiterates much that was in the 2002 Declaration on the Conduct of Parties in the South China Sea (DoC), and contains only a few new items. It is especially disappointing for those ASEAN members who had long argued that the CoC should be legally binding.

The Preambular Provisions section lists three items: bases of the CoC, interconnection and interaction between the DoC and CoC, and importance and aspirations. It does not provide any details on how the DoC and CoC will relate to each other. People familiar with the discussions, however, suggest that in China’s view the DoC takes precedence over the CoC, and the CoC should be seen as part of the implementation process for the DoC. As a consequence, the final CoC might not look too different from the DoC.

Objectives within the General Provisions

The second objective is “to promote mutual trust, cooperation and confidence, prevent incidents, manage incidents should they occur, and create a favorable environment for the peaceful settlement of the disputes.” The requirements of promoting mutual trust, cooperation, and confidence are already in the DoC. What is new is the reference to preventing and managing incidents, which reflects concern within ASEAN that the frequency of such incidents has increased greatly since the DoC was signed in 2002. Over the years, several ASEAN leaders have warned that unless tension-generating incidents are reduced, the organization’s credibility and aspirations for “centrality” within the regional security architecture will suffer. 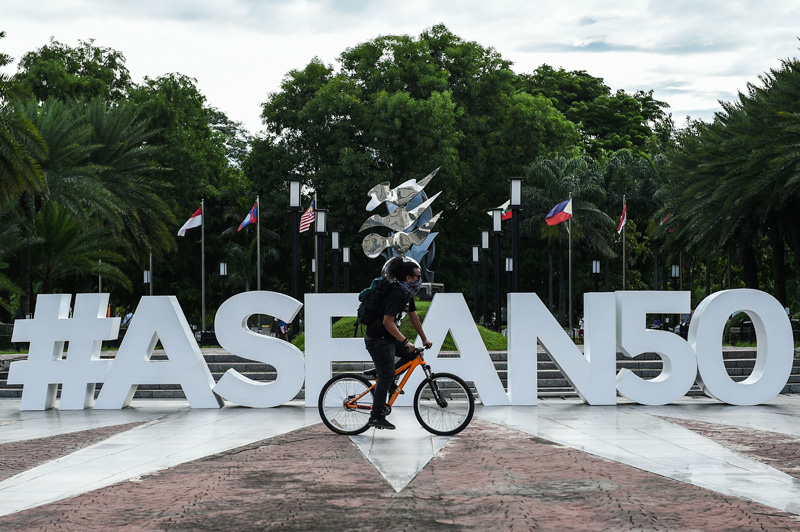 A man cycles near the venue for the Association of Southeast Asia Nations (ASEAN) Regional Forum (ARF) meeting in Manila on August 4, 2017. MOHD RASFAN/AFP/Getty Images.

Principles within the General Provisions

The framework goes on to enunciate a set of four principles. The first is that the CoC is not an instrument to settle territorial or maritime boundary disputes. This clause is included to reinforce the notion that the ASEAN-China DoC/CoC process is about conflict management rather than conflict resolution. Resolving the dispute is up to the parties themselves. ASEAN has never arrogated to itself this role, and China has long argued that the dispute can only be resolved bilaterally—that is, between China and each of the claimants separately.

The second principle commits the parties to the “purposes and principles” of the UN Charter, United Nations Convention on the Law of the Sea (UNCLOS), Treaty of Amity and Cooperation, and Five Principles of Peaceful Co-existence.

The third principle commits the parties to the “full and effective” implementation of the DoC. ASEAN and Chinese officials have been discussing specific implementation proposals since 2005, but progress has been very slow. To date, not a single proposed cooperative project in the DoC has been put into effect.

The fourth principle of the CoC framework reiterates two of the principles contained in the Five Principles of Peaceful Co-existence: the importance of respect for each other’s independence, sovereignty, and territorial integrity; and noninterference in the internal affairs of other states. The repetition is deliberate and was inserted by the ASEAN states as a way to remind China that it must respect the sovereignty and rights of its Southeast Asian neighbors.

Basic Undertakings within the General Provisions

The “basic undertakings” subsection consists of six parts: duty to cooperate; promotion of practical maritime cooperation; self-restraint/promotion of trust and confidence; prevention of incidents, followed by two bullet points (“confidence-building measures” and “hotlines”); management of incidents, followed by a bullet point that repeats “hotlines”; and “other undertakings in accordance with international law, to fulfil the objectives and principles of the CoC.”

Duty to cooperate is an obligation under UNCLOS, which all the parties except Cambodia have ratified. Promotion of practical maritime cooperation provides no details but is likely to include search and rescue, maritime scientific research, environmental protection, and combating transnational threats—areas touched on during previous discussions between ASEAN and China. “Self-restraint” is not defined and was one of the major shortcomings of the DoC; if the CoC is to add value, this term needs to be clearly defined with a set of “dos and don’ts” that would inform the “prevention of incidents” clause. With regard to confidence-building measures, some progress has already been made: in 2016, ASEAN and China agreed to apply the Code for Unplanned Encounters at Sea to the South China Sea and establish diplomatic hotlines for use during emergencies and crises. These are likely to be incorporated into the CoC. 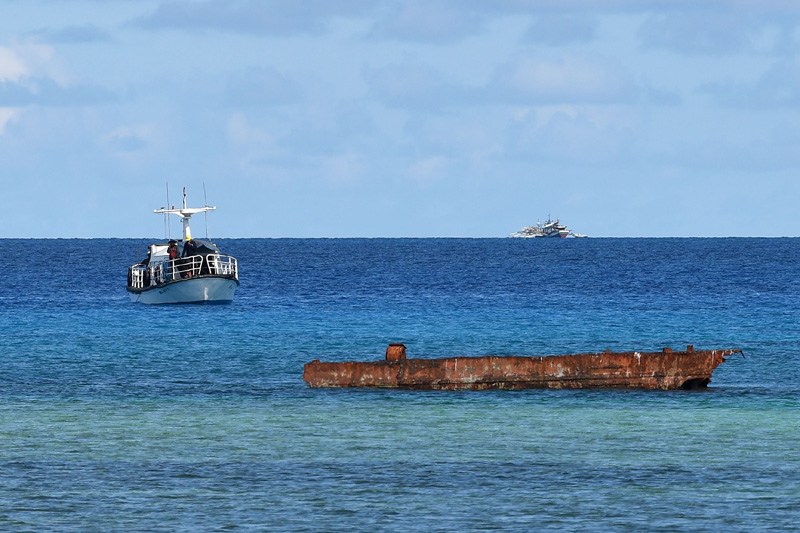 A research boat (L) and a Filipino fishing boat (R) near Thitu island in the Spratly islands on April 21, 2017. TED ALJIBE/AFP/Getty Images.

The third and last part of the framework is Final Clauses. This section has five brief lines: “encourage other countries to respect the principles contained in the CoC”; “necessary mechanisms for monitoring of implementation”; “review of the CoC”; “nature”; and “entry into force.”

Two important issues are absent from the framework: geographic scope (over which Vietnam fought and lost a diplomatic battle with China during the DoC negotiations) and enforcement and arbitration mechanisms. The absence of the latter is fairly typical for ASEAN documents, which generally omit enforcement clauses. It is unclear whether future talks will define the geographic scope of the code, but if the code applies to the South China Sea, that may not be a problem.

The framework will form the basis of future negotiations on the CoC, which will probably start later this year. If past is prologue, this process is likely to be protracted and frustrating, especially for those Southeast Asian countries that are keen to have a legally binding, comprehensive, and effective CoC in place as quickly as possible.

RELATED POSTS
China’s Assertive Behavior in the South China Sea and the Implications for India
The Law of the Sea and South Korea: The Challenges of Maritime Boundary Delimitation in the Yellow Sea
The Role of Fishing Disputes in China–South Korea Relations
South Korea in a Challenging Maritime Security Environment
Britain, Brexit, and the South China Sea Disputes
TAGS
ASEAN
China
Code of Conduct
South China Sea
SHARE