The intensifying disputes over control of the South China Sea are ultimately rooted in disagreements over national sovereignty, territorial control, and the rising power of China as it intersects with the existing East Asian maritime security order dominated by the United States. That said, within this broad context there are different layers of competition that act as multipliers for rising South China Sea tensions. Competition for control of potential energy resources and key energy transit routes through the South China Sea and Malacca Strait stands out as one critical factor that has heightened the stakes in the complex matrix of maritime disputes. 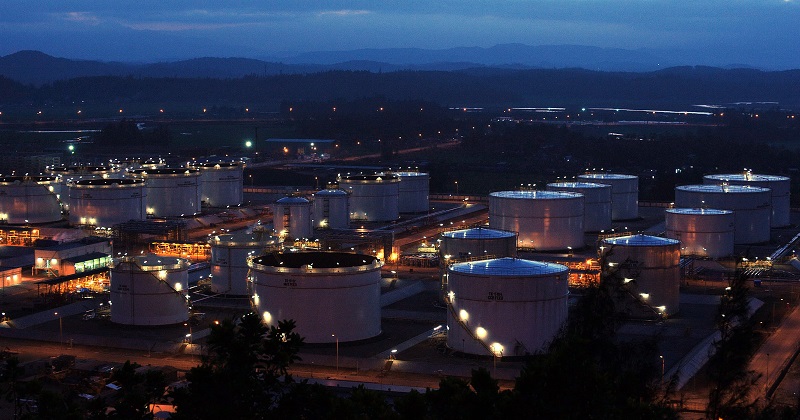 The role of energy in South China Sea tensions can be divided into two distinct but interrelated baskets. First, territorial control and maritime jurisdiction confer, respectively, control over and ownership rights to oil and natural gas resources. The intensifying regional jockeying among the littoral South China Sea states over territorial claims thus has important energy security implications for all the contenders. China’s expansive but vague nine-dash line claim encircles many oil- and gas-rich zones off the shores of key regional producers, including Vietnam, Malaysia, Indonesia, the Philippines, and Brunei. Most of these potential disputes over energy resources remain simmering in the background, but in the most contentious case, China has repeatedly challenged Vietnam’s offshore deepwater exploration activity, including through joint projects with India’s Oil and Natural Gas Corporation, Russia’s Gazprom, and ExxonMobil. In 2012, China announced a column of nine new exploration blocks that closely track the nine-dash line claim and extend far into Vietnam’s 200 nautical-mile exclusive economic zone (EEZ). In May 2014, the Chinese National Offshore Oil Company (CNOOC) moved its new deepwater drilling rig HYSY-981 into Vietnamese-claimed waters for over a month of drilling, leading to violent demonstrations in Vietnam and attacks on perceived Chinese businesses. Vietnam protested a similar Chinese rig incursion as recently as January 2016.

The main impact of the territorial and maritime disputes has been to block the development of new oil and gas resources in the majority of the South China Sea, particularly in what could be the more attractive deeper-water areas. These waters are increasingly accessible as new technology advances. However, despite journalistic hyperbole about the petroleum riches of the South China Sea, the reality is that most Western estimates of the region’s oil and gas resource potential suggest relatively modest resources, not nearly large enough to alter Asia’s deep dependence on oil and gas imported from outside the region. For example, the U.S. Geological Survey (USGS) estimates reserves of 11 billion barrels of oil and 190 trillion cubic feet of natural gas. For perspective, according to the BP Statistical Review, in 2014 the Asia-Pacific consumed 11.2 billion barrels of oil and 24 trillion cubic feet of natural gas. Moreover, the region is mainly natural gas-prone, rather than oil-prone , and gas exploration and production conditions there are extremely challenging and unfavorable. In sum, the overall potential for the South China Sea is probably relatively limited. However, Chinese sources make much higher estimates than the USGS, which could suggest a correspondingly higher level of interest in establishing sovereignty and jurisdiction, either officially or within a lobby of maritime actors. In November 2012, CNOOC estimated that the area holds around 125 billion barrels of oil and 500 trillion cubic feet of natural gas. To the extent that Chinese sources estimate a much larger resource potential, it may help explain at least a small part of Beijing’s aggressive approach toward sovereignty in the region.

The second basket of energy issues in the South China Sea is the impact of territorial disputes on the transport of energy to and from non-claimant states in Asia, including Japan, South Korea, India, Singapore, and Australia, along with the United States. All these states have a core national interest in ensuring that the critical sea lanes in the South China Sea remain open and secure. The transit of energy through these sea lanes is now threatened by broader strategic rivalries across the region  between the United States and China, Japan and China, and other regional powers seeking to manage and channel the rising maritime power of China toward supporting—rather than disrupting—the existing regional maritime power architecture. Roughly one-third of the global oil trade and over one-half of global liquefied natural gas (LNG) trade passes through the South China Sea. According to the U.S. Department of Energy, these sea lanes account for roughly 75% of China’s oil imports, 85%–90% of Japan’s and South Korea’s oil imports, and 33% of Japan’s and South Korea’s LNG imports. Australia is likely to become the world’s largest LNG exporter by 2020, and the vast majority of its LNG exports will pass through the South China Sea to markets in China, Japan, and South Korea. Singapore’s role as a major refining hub supplying oil products throughout Asia is likewise dependent on open and secure sea lanes. India is also a major refining center and exporter of oil products to East Asia through the South China Sea. 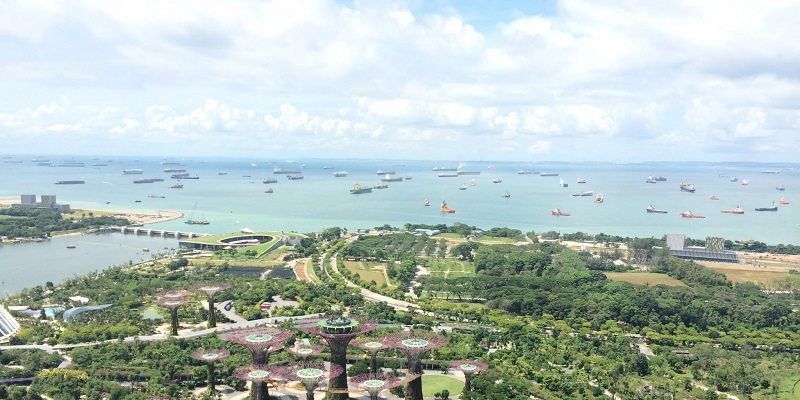 Hence, securing reliable energy supplies and shipping to fuel Asia’s prosperity is tightly bound up with the maintenance of freedom of navigation through the South China Sea and Malacca Strait and is a core energy and national security interest for virtually every regional power. The intensifying engagement between the People’s Liberation Army (PLA) Navy and the U.S. Navy over navigational rights and the application of the United Nations Convention on the Law of the Sea (UNCLOS) in the South China Sea has significant energy security implications. China’s island-building activity in the Spratlys, attempts strengthen its positions and claims in the Paracel Islands, and increasingly vocal assertions that these “islands” confer rights to 12 nautical mile territorial waters and potentially to EEZs of up to 200 nautical miles, if allowed to stand, would significantly undermine the existing U.S.-led architecture for maintaining open and unconstrained sea lanes throughout the South China Sea. China has tried to reassure the region that its presence in the region would help ensure freedom of navigation, but its interpretation of what rights maritime shipping and naval vessels would have within its territorial seas and EEZs seem to represent a narrower and potentially troubling interpretation of UNCLOS. Further, Beijing’s “slow-walking” of negotiations for an ASEAN Code of Conduct and refusal to engage in the arbitral case brought by the Philippines add to suspicions about China’s real intentions.

At this juncture, the key source of friction has been China’s interpretation of the transit rights of military vessels rather than commercial or energy shipping. The U.S. Navy has now conducted three freedom of navigation operations—the first passing Subi Reef in the Spratlys, the second around Triton Island in the Paracels, and the most recent near Fiery Cross Reef in the Spratlys. (See MAP’s Incidents Timeline for more details.) Each operation provoked loud and indignant reactions from Beijing.

There is no indication yet that China’s approach to regulating oil and LNG shipping would differ from that adopted by the United States and its regional allies. The deeper concern for the region is over the broad implications of a stronger PLA Navy and how China could potentially curtail freedom of navigation during tense times. All signs indicate that Beijing’s goal is to push the United States out of East Asia rather than find a collaborative approach to regional maritime security. When it comes to energy security, China has consistently taken a “China first” approach and has not shown real interest in building a more multilateral or regional energy security framework for energy cooperation.

Despite the formidable obstacles presented by the heated atmosphere in the South China Sea, there are practical options to enable development of oil and gas resources. “Joint development” arrangements, whereby claimants agree to set aside territorial claims “without prejudice” for future resolution and jointly develop energy resources in a contested area, are quite common globally, including in Asia. For example, the Malaysia-Thailand Joint Development Area (JDA) has been in operation in the Gulf of Thailand since the mid-1990’s in a maritime zone claimed by both countries. China has traditionally supported such joint development of resources in disputed areas. For example, China, the Philippines, and Vietnam agreed to a joint seismic program in 2005 in an area claimed by all three, on the understanding that the work would not undermine their respective claims. However, that agreement ultimately expired, largely due to domestic controversy in the Philippines.

The broader issue of the United States, China, and other regional powers finding an accommodation over strategic control of the South China Sea’s vital energy sea-lanes looks rather more intractable. One proposal might be to forge a special, narrowly focused regional agreement on jointly protecting oil and gas transport through the regional seas. A possible template for such an agreement is the 25-nation multinational anti-piracy naval task force that has been operating in the Gulf of Aden and northern Arabian Sea since 2008. The coalition operates in parallel but often with some coordination with other independent anti-piracy operations conducted by China, India, Iran, and Russia. All told, countries operating together or independently include nearly all the key Asian oil importers and rival powers. While this option might be a bridge too far in the current increasingly tense atmosphere, thinking through the requirements of a joint-protection regime could lay the groundwork for the launch of such a program at a more opportune time.

Mikkal E. Herberg is Research Director of the Energy Security Program at the National Bureau of Asian Research (NBR) and a Senior Lecturer on international and Asian energy in the School for Global Policy and Strategy at the University of California–San Diego.